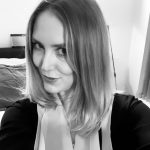 Kim is an Associate Producer for Eclipse.

Kim has since gone on to work closely with producers Andy and John across the Eclipse slate. This has allowed her invaluable experience, working within the confines of a small, independently run family business. Although challenging at times, the highs and lows she wouldn’t change for the world.

In 2018 she became an associate producer on British crime thriller The Corrupted. The cast included; Sam Claflin, Timothy Spall, Hugh Bonneville, Naomi Ackie and Charlie Murphy. The film was released in the UK with EFD in May 2019. The Corrupted was later nominated in three categories at The National Film Awards 2020.

Kim is currently working with the producing team on Frankel, working again with director Ron Scalpello. Due to originally shoot in the UK in May 2020, the production was pushed due to the pandemic and is expected to now shoot in 2022. Frankel stars Jeremy Irons, who is also a producer.

Kim has spent the last five years working closely with writer/director Niall Johnson, developing eccentric British comedy Sons of Neptune. This is a project particularly dear to her heart. The project is currently casting and due to shoot in Scarborough in 2022.

After over 6 years at the company, Kim is now an integral part of the team. She is involved throughout development, production and post production.  Kim particularly enjoys the creative aspect of the script development stage with an interest in writing herself.

Kim is currently working on; Sons of Neptune, The Climb,  Frankel,  King Richard – The Little Richard Story, The Life and Times of Freddie Mills, Ride A White Swan.

Born and raised Londoner, Kim studied at Fine Arts College  going on to study design with marketing . Deciding to drop out early and get a job, she went on to dip her toes in several areas within the media sector, including Film & TV PR and working at Universal Music  A keen traveller, she has also spent some time living and working in Australia.

In between her time developing the Eclipse slate she has been developing her own projects. Kim’s other interests include; yoga, writing poetry, EFT and meditation. Kim is a huge advocate of bringing a voice and awareness to the struggles of mental health having experienced anxiety for most of her life. She has always had a great interest in the therapy sector and is currently training as an EFT practitioner as a way to help others.