When Timothy Spall and Imelda Staunton arrive to London’s Soho Hotel to discuss their new film “Finding Your Feet,” they can’t stop complimenting each other.

Spall, who recently finished shooting “Mrs. Lowry and Son” with Vanessa Redgrave, hasn’t seen his costar since December 2016, shortly after they finished production on “Finding Your Feet.” “People make an assumption that if you’re in a movie you must see each other all the time,” he says, after the duo finishes hugging and sizing each other up. “But we have known each other a long time.” 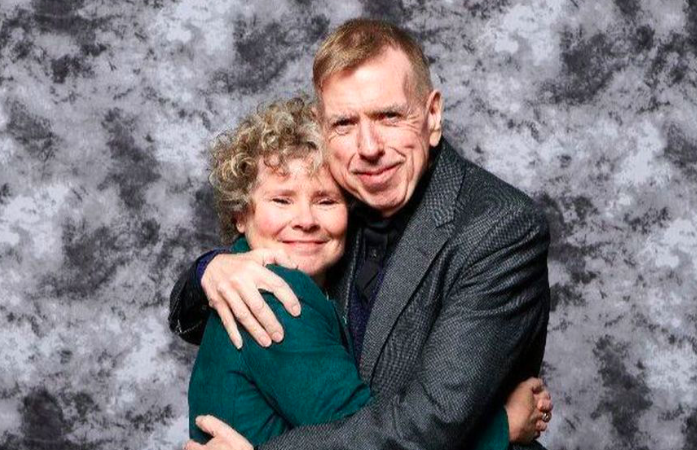 Spall and Staunton first met in 1975 as students at the Royal Academy of Dramatic Art. Although neither remembers their actual first meeting, they were continuously aware of the other throughout the two-year course. They shared the screen in an episode of BBC Two’s “Performance” in 1992 and both appeared in the Harry Potter film series (although never in the same scene) — but it’s really this film, directed by Richard Loncraine (“Richard III”), that allows the pair to lead a picture side by side.

The heartwarming story follows a rigid, closed off woman named Sandra (Staunton) whose life is turned upside down when she discovers her husband is cheating. In her grief and confusion, Sandra seeks out her estranged sister Bif (Celia Imrie) and joins a community center dance group that includes an amiable, houseboat-dwelling gentleman named Charlie (Spall). Although it may sound like a generic plot, the film avoids cliché and sentimentality, often veering into surprising places, which is exactly what attracted the actors.

“I must say when I read the script at the start I thought, ‘Oh I know what’s going to happen and which way this is going to go,'” Staunton admits. “But then it was like, ‘Oh! It hasn’t gone that way! That’s interesting.’ I found it a bit unpredictable, which I quite liked. It is this sort of film with a feel-good idea, but it deals with some of the subject matter very sensitively.”

“The lovely thing about it is that it all felt natural,” Spall says. “No need for any bull… We just got on with it. The great thing is that when you’re working with people who you admire and know — this sounds like a bit of a love fest, but it’s really true — you don’t have to mess about. You can get straight into the center of it. Anything that’s a problem you iron out without any messing about.” 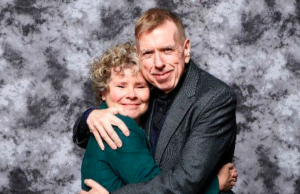 The film was shot in London and Rome in November and December 2016. A pivotal part of the story is a scene in Piccadilly Circus, where the dance group performs in the middle of a crowd. The actors actually performed live in public with only a few extras, creating the dance sequence in the course of a few hours. Staunton had a few weeks to learn the choreography, but Spall was more pressed for time, having just finished shooting another project in New Zealand. “I found it very nerve-wracking,” he says.

“It absolutely was, because it was in public,” Staunton says, jumping in. “We had about 30 extras. We’d go and do it, and then we had a club nearby where we’d go and wait until there was a new set of [onlookers] so they’d be surprised by it. We did it about five or six times. It was guerrilla filming, in a way. Thank God we had rehearsals because it wasn’t easy. But it’s not a film about dance. I love that when you see us dancing you can see those characters dancing. We don’t all turn into these [experienced] performers.”

“I always thought of the dancing as a vehicle for these people to be with each other and, in some way, express something,” Spall says. “It was this attempt at trying to find some self-therapy.”

Over the course of “Finding Your Feet,” the protagonists evolve, reminding the viewer than even those who have reached their later years have the ability to change and open up. The film deals with getting a second — or even third — chance at life. It’s about people who are of a certain age, but the story never reduces the characters to a number or loses its relatable quality for a younger audience.

“I don’t think any of us were aware we were making a film about older people having relationships — they were just people, whether we were 23, 19 or 98,” Staunton says. “We were just telling the story of their difficulties, of their upsets, of their humor. It seemed to do that quite well, I thought. And I don’t think we ever felt like ‘Oh blimey, this is a bit token’ at all. We’re not those sort of actors. I never felt we had to go against anything too sentimental.”

“It was a very different script that we started with,” Loncraine adds. “It definitely evolved, and I think it evolved for the better. This film is not going to change cinematic history and it never intended to. But I do think that it’s a film that’s honest. It sneaks up on you in a way that I’m quite proud of.”

“Your job is to turn up as a human being and look convincing, but in the end you can only do that by really try to understand the character,” Spall says. “And even if they’re not nice you have to dig and find out what makes them like that. I think that’s why we get on so well, because I’ve always thought that Imelda is a great character actor. You don’t bend your character to you — you bend yourself to the character. That’s the definition between the two.”

“That’s exactly what you do, too,” Staunton replies. “I never worry about what I look like, nothing. Although surely every part you play is a character and it’s not about leading roles or character roles. It’s just a part with a different amount of lines. But I do think the character comes first.”

“If you make that your precedent it liberates you from you,” Spall adds. “There’s no doubt about it, actors are driven by a certain amount of ego. But there’s a way of using that to investigate somebody else. Instead of saying ‘This is going to make me look good,’ you say ‘I’m going to make that person look good.'”

Staunton, who has spent a lot of the past few years on London’s stages in “Who’s Afraid of Virginia Woolf?” and “Follies,” is ready to take a nice long break. She plans to take a few years off from theater and focus on film and TV, although she’ll never fully retire from acting. She’s not even sure that’s possible.

“I challenge you to say that to any actor,” Staunton replies. “You just don’t do it. That’s not part of the makeup. Look how many stories there are to tell — and the stories are not just about 15 to 19 year olds. It’s about life and people. So why would one retire? It just doesn’t exist.”

“I think it’s something that gives you up, rather than you give up,” adds Spall, who is currently filming “The Corrupted” in London with Sam Claflin. “It’s more of an affliction than a choice because, to me, it’s something I have to do.” He adds, grinning, “They’ve been putting up with us a lot recently.” 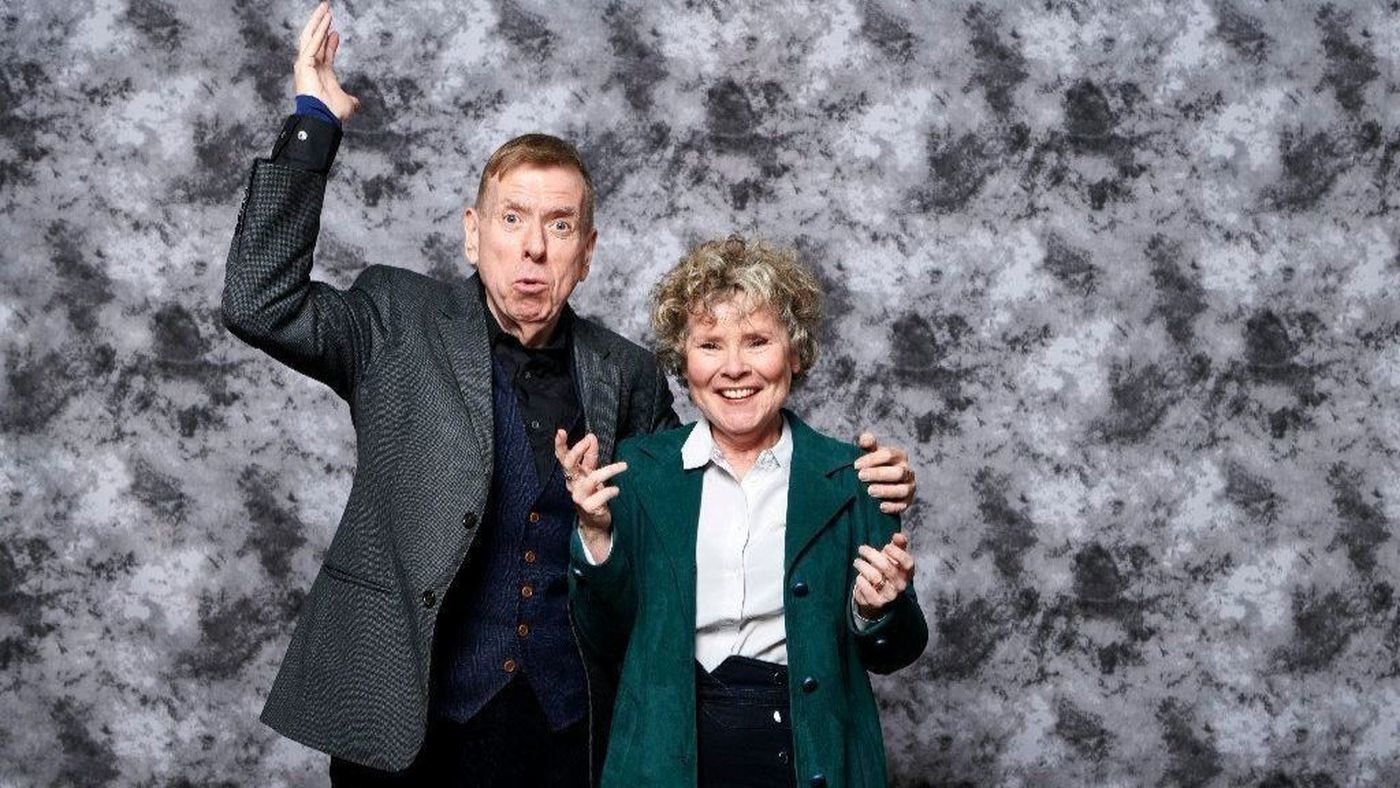 As to whether audiences can expect to see the pair together onscreen again soon? Maybe, if the project is right. “We try to do it every 18 years,” Spall quips. “Although let’s not wait that long or we’ll have to do it from that home where all the actors eventually go.”

Taken from the LA Times , published